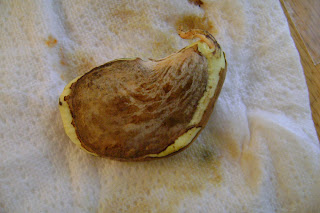 OK... so we're back with Mango Sprouting for Garden Dummies.

After however-long the seed has sat in its paper-towel mummification, you can see (I hope) that it has sprouted a little tail. I have no idea which bit this is, the root or the shoot. I also still have no idea which side of the seed is supposed to go up.

So now I take a pot - this is actually a Bio-Pot of some sort made of pressed miscanthus grass, but it was the only one I had in the house and I didn't feel like running outside. That means it will start to biodegrade in a couple of months and I'll have to place the pot inside a real plastic pot if I don't want the bottom to start collapsing where it gets wet regularly. 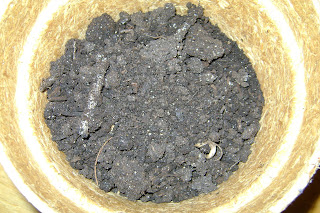 I dumped in some bone-dry potting soil and rewet it with warmish water, stirring it around a bit to break up the icky clumps (it was nice, fresh potting soil but I let it dry out in the coleus greenhouse as the coleus stumps in it died right away).

Then, I lay the seed in, flat, and covered it with half an inch or so of potting soil. At this point, I'm just finding my way blindly, so we'll see if anything happens. 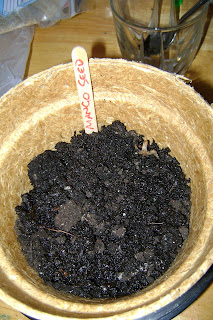 In a fit of optimism, I custom-made a "tag" out of a half popsicle stick I found sitting around (how pathetic is it that I couldn't find a whole one? I know there must be millions here - we're always tripping over them, well, not literally).

So here it is... the Mango Sprouting Experiment.

{EDITED MAY 11:  okay, I hate to spoil things here, but this experiment was an awful failure and the stupid biopot eventually fell apart.  However, I finally did get a (different) mango seed to sprout leaves in this post, so the mango torture experiments will live on…}

Tuesday: My chicken made over asian rice with leftover soup & frozen peas/corn

I am not doing overwhelmingly well in the suppers department, but at least I'm back to cooking...

I took the bandage off on Monday and so far, so good. I have no idea what's holding my scar together, as I can't see any stitches or anything. Were two days of staples really enough???