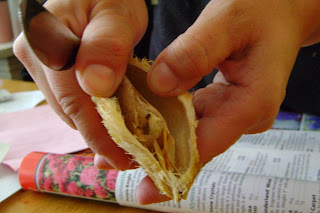 OK, so you'll remember that in Part 1 (just a second ago, in my time!), we used a butter knife to crack open the husk of a mango PIT to reveal the soft SEED within. 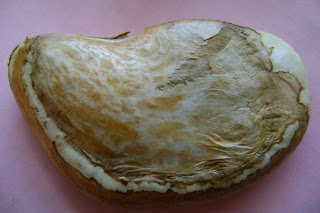 Anyway, what you want to do at this point with the seed is "wet it and forget it." Because it takes bloody forever for it to do anything - at least for me. 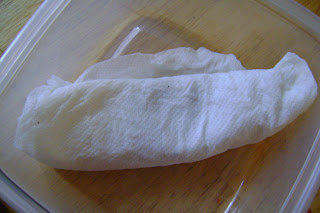 Dampen a paper towel - I like it to feel wet but not drippy. Wrap it all around the seed; there's no special knack to it.

Here, I've encased the mummified mango seed in a little plastic container sarcophagus - that's because I was trying to do away with baggies at the time - or at least, trying to use fewer of them than we had been; we are SOooo addicted to baggies.

However, the mango shown in the picture (#1, 3 and 4) got pretty mouldy due to neglect and had to be thrown away, so this time, for the "real" attempt, I sprouted the seed shown in picture #2 above in a paper towel, in a baggie. So there you go - sue me. Either method - baggie or container - should work fine as long as it holds in most of the moisture, ie the paper towel can't dry out. 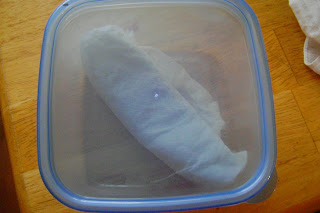 From this point, I'd give it a week, at least.

I personally tend to forget about these things and come back after a ridiculously long time. I forgot the seed for a week, then had my belly-button surgery, then recuperated for a week, so I opened mine up today after two and a half or three weeks. It was fine - a bit mouldy on the paper, but the seed itself was okay.

Read on to Part Three here.