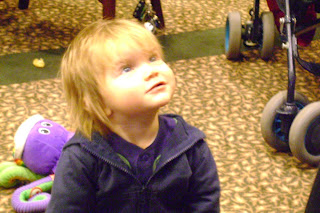 Here's a sweet shot of Gavriel Zev in shul yesterday morning. Why were we in shul at 7 a.m. on a random Monday morning in November???

YM lained the first bit of parshas Vayeira because my father wanted to "treat" his brother to an aliyah... maybe his first since his bar mitzvah. My mother took Ted at ten to six to spring my father from the hospital for a few hours. Why Ted? Because she needed somebody to sit in the car at St Mike's and make sure she didn't get a ticket. He took it very gracefully even though it meant he only got about 5 hours' sleep.

Oh, and then I went down to wake up YM and told him we were leaving for shul in 20 minutes and that I'd drive him. He promptly went back to sleep - even though I'd switched his room light on - and Ted arrived five minutes later to tell him Bubby and Zeidy (my parents) were taking him straight to shul - ten minutes ahead of schedule.

It's convoluted, and luckily, he didn't yell and scream. He knows my father is becoming ever more intensely HIMSELF... whatever that means. Uber-punctual. And like a toddler, too, in that the things that are important to him will not wait. 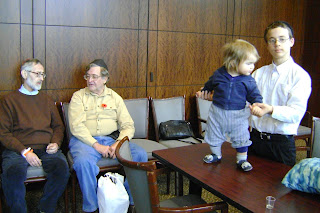 The laining part was actually supposed to be a surprise for my father. YM is planning to lain Chayei Sarah in shul next week, because that's his bar mitzvah parsha. But my uncle won't be in town next week, and my dad wanted to have this aliyah and make a l'chaim at shul with him (my uncle - sorry about the pronouns!). So YM decided to surprise him (my father) by doing the laining this week as well.

And then, not knowing it was a surprise, I spilled the beans by telling my father how hard YM was practicing. Well, YM screamed and screamed when he found out I'd told him. But I said I was only saying it because I was proud of him, and he KNEW darn well if I knew it was a surprise I wouldn't have told Zeidy. So he settled down in only an hour or so... :-) 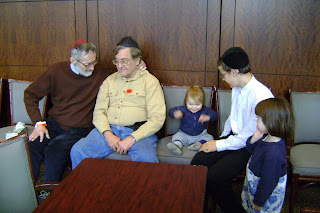 He did a great job and they had a little l'chaim in the bais midrash afterwards. Here is my father and his brother... my dad leaning over to give his brother a hug, at which point I figured I should back away with the camera and give them some privacy.

This was a spontaneous visit, probably brought on by the news that they will never see each other again in this life. They haven't been geographically close (he lives in central B.C.), and have often seemed as dissimilar as it's possible for two siblings to be. I wonder if I'll ever see my uncle again? Maybe... their sister still lives here in Toronto.

It is probably hard for him to travel, though; he walks very slowly... I think because of his arthritis, but I never ask.