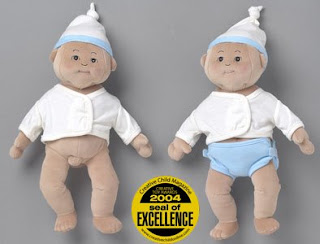 Well, here's what I got him... and let me just say, he was TOTALLY surprised!
It's a Baby Bottoms Doll. They're available in various ethnicities, but I ordered this one, which is hispanic, because the caucasian model is so very, very unnaturally white. The shade of white my father has turned lately. Deathly-pallor white.

Aren't these the sweetest little "babies"? They're anatomically correct, but not OVERLY so, if you know what I mean. Some of them look like something cops would use with abused children, all in-your-face and dangly. This guy is cuddly and comes with a diaper so you can still take him to shul. ;-)
(Naomi has his big sister already: http://www.kidsandgrandkids.com/products/large/hispanicbg.jpg)

Bad experience ordering it, however. Ordered from a company called dollslikeme.com based on my two criteria: had to ship internationally, and had to take PayPal. Those two things totally limited the playing field, so I was happy to find this company - at first.

When the doll didn't arrive and I didn't get a ship notice a week or so after I ordered, I contacted the company and was assured the doll had shipped on September 21st - a week before I'd ordered it.

Well, the owner promised me she'd gotten me mixed up with another customer - great record-keeping. And after I filed a PayPal dispute, she said they were out of stock on the one I'd ordered, but she could send me another one.

When that one didn't arrive in a couple of weeks, I escalated my PP dispute to a claim, and eventually, she provided shipping info and the doll arrived - with a customs charge of $16-something ... because she'd written in the value of this $20 doll at $74. For a $20 item, I probably wouldn't have had to pay anything. As it was, we were fishing around for change and finally gave the Canada Post driver what amounted to a $2 tip because they can't make change.

I emailed the owner about the customs charge and the fact that she'd declared the value wrong (maybe spitefully?). And because her email is slow (she said they've had to lay people off because of the "economy" and are swamped because of the "approaching holiday" - in SEPTEMBER???), she finally got back to me yesterday, over a week later, to say she'd happily reimburse the $8 I had asked her for (because I didn't feel right asking for the full amount, just the overcharge) once I paid for the doll.

Which totally stymied me. I mean, hello? She shipped the doll because I paid for the doll, right? That's what that whole paypal transaction was about. I emailed her my PP receipt for the original payment but given the amount of time it takes for her to respond to emails, doubt I will ever hear back from her again.

Anyway, just so you can avoid it, the company's name is DollsLikeMe.com - they have a whole bunch of cute ethnic dolls on their site, but don't let that fool you. The owner's name is Denise Gary Robinson.

The great news is that the baby loves his doll - and Naomi loves it even more. She adores its "PEEeeeeenis"! (so do I; truthfully, it is just as cute as can be!) And she loves putting them together so they look like twins.

Apparently, the company that was making these, Fanny's Playhouse, is now under new ownership, so I don't know how readily available the dolls will be in future. But in the meantime, if you're looking for a cute and slightly different gift, I'd recommend a Baby Bottoms Doll. And I'd definitely recommend you buy it somewhere other than DollsLikeMe.com. :-(((