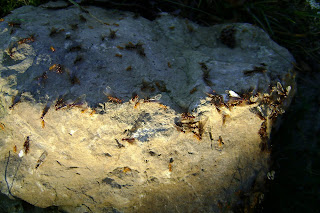 Gack! I'm still covered in ants from this crazy swarm going on outside... must be mating
day! 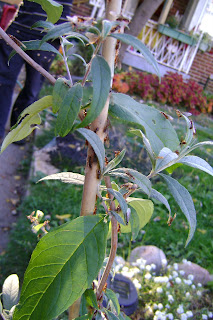 I think I'll be feeling creepy crawlies, both real and imagined for a while... I went out to take pictures and only too late realized 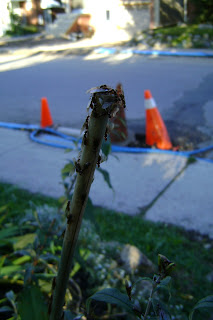 After Yom Kippur Supper:
~ Blintzes (too-thick too-big skins by Elisheva Chaya, filling by Ted, stuffed by Ted & me)
~ Honey-Mustard Salmon by Yerachmiel Meir - just right on the second attempt! The
first attempt involved stirring all the ingredients, including mustard and bread
crumbs, together in a bowl. Whoops!
~ Lime pie by MOI!
~ Ace Bakery bread
Mmmm...

Shabbos food:
~ Challah
~ Chicken Soup (made ahead and frozen since Wednesday) w/ kneidlach by me
~ Garlic-Mayo Shake n' Bake Chicken by Ted
~ Leftover potato broccoli kugel from before Yom Kippur, by me
~ Leftover cranberry kugel from before Yom Kippur, by me
~ Chocolate cake by Elisheva, baking as I write this...
~ Pumpkin spice cake with Orange Frosting by me - ok, it's white cake mix with the other half of the pumpkin pie filling mixed in! :-)
~ YM's food task was peeling potatoes for the cholent.

Once again, beyond the cholent, we have utterly failed to plan for Shabbos lunch. There's still time to boil eggs, at least...