But things are somehow looking a little less bleak on this warm, sunny afternoon. 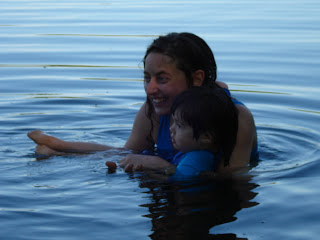 Here are some pictures of our happy family from this past summer!

Meanwhile, yes, the oven is still broken, and there's no way we can pay for it before Yom Tov, so there it is. I sure do hope the downstairs one still works. Ted is turning on the gas and testing it when he gets home (late) this evening.

Tuesday: Chili with cornmeal plus bisquik biscuits baked on top, Eden brand refried beans, mushroom barley soup from a tin that was so awful... that was the day YM & I went to the allergy doctor. More on that later.

Wednesday: OMG, omg! The best, best, chicken stir-fry ever. Made a not-too-sweet stir-fry sauce based on fresh squeezed orange juice and chicken soup. Plus oven-baked fried rice, which was when I discovered the oven was broken. I made the oven-fried rice with mostly sticky rice and a little basmati - YUM! It was so perfect!

And then, tonight (Thursday):

Ted's working late, so...
Leftover - chili from Wednesday night - it was actually amazing chili, with beans and Yves fake ground meat and a couple of tins of tomatoes and taco seasoning. Super, super easy and very impressive. Plus, lots of cheap food to go around.

Oh, plus some kind of corn soup from my mother that I will doubtless have to doctor because it's from a tetra pak with some creamed corn thrown in. My father refused to eat it... like he does with most things these days. 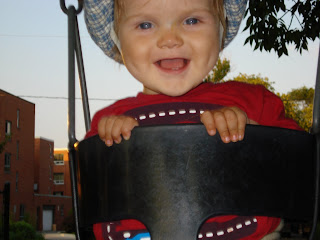 She seems depressed because he's not eating anything. Fair enough; I think I would take it very personally, even if I completly understood the underlying medical condition. I take it personally if Ted has a stomach thingy and can't eat for a couple of days: can't imagine what it would be like if he couldn't eat my food again ever. Yes, I know it's immature, but I'd sure get mad. Food is love, right? 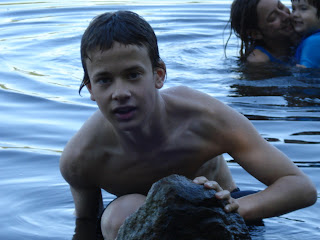 I love this picture of YM because it's rare that I get to see how his body is developing (ok, gack, cliché coming) into manhood. And I don't take enough pictures of him because, honestly, he gets on my nerves sometimes.

But he pointed out last week, there hasn't been any screaming from him since he started school, and I think it's worth taking some time (here) to stop and note that, as well as telling him (which I did) that I was proud of him (and appreciated his pointing it out because honestly sometimes I'm too busy to notice one less fly buzzing around my head, even though his yelling was a BIIiiiig fly). 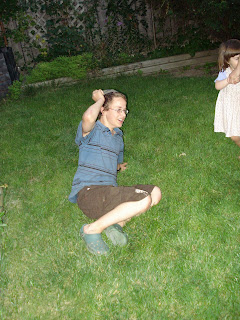 I keep telling him, these long school days are very very good for him. I think most kids in high school have too much time on their hands and either want to get jobs (ie disposable income to spend on disposable stuff like phones and mp3 players) or hang out getting into trouble. Well, the kids at his school kind of get into trouble anyway, and it does worry him, because it's his first exposure to high-school-aged kids after the past two years in a very sheltered environment. His idea of trouble is smoking. My idea of trouble is pregnancy: not much chance of that in an all-boys' school, right? I know bad stuff does happen in yeshivos and Bais Yaakov schools and everywhere... but I think there's enough supervision, plus smoking is really the most minor thing compared to what could be happening.

Oy, enough. Must go reseed the lawn. Maybe I'll take pictures and post them here later; it's coming along great...! I believe the grass is even rooting through the newspaper, though we will see in a couple of weeks...

Our neighbour Pianist Paul, who always blesses our things as he walks past (he never fails to utter some kindness towards our garden, our trees, our lawn... even when it was 93% clover!) tugged on one of the grasses the other day and said he believed it was holding. We'll see.

Today, as I was pulling in from taking Naomi to Morah Ilana (Gavriel Zev was sleeping so he stayed here with Ted), carefully avoiding the stack of trash at the end of the driveway, he blessed my driving skills, saying he has no idea why they say women are bad drivers. He looked awful today, though. Ashen and gray. I hope he's alright. There is a white-haired man who also walks up and down the street... I just figured out a couple of months ago that they are partners.

That's my mother's word - "partner." I don't like to say "partner," as it makes the whole thing sound like a shady business deal. Husbands... a little too mainstream. Boyfriends... a little too giggly. Anyway, they live together. And I just figured it out. I mean, I've known he was gay always... he used to play piano somewhere with my mother, though I never know if he knows this when he stops to chat and offer his daily Yard Blessing.

And after 3 years of us living here, it's a bit too late to mention it, because then you have that awkward "I know that!" conversation. That everybody seems to have when I try to fill in one of these "backstory" type connections. Am I the only one who doesn't remember the past?

I realized this morning that we haven't visited Sara's cats in about a year, maybe more. I was thinking of taking Naomi down there tomorrow morning when Ted's off work. But first I have to make sure I don't have a dentist appt, which means I have to call the dentist's office and find out when I made all those appointments for, which I have been putting off all week... okay, biting the bullet, and thenI'll go overseed the lawn.