Naomi, on finding a bunch of change in the laundry

Me: Let's take it upstairs and put it in the pushke - if we find money in the laundry, it's not ours, we put it in 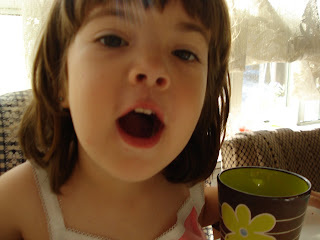 Since last Sunday, she's gone totally off brisses, her fascination of the last almost-one-year... she's now making weddings. She'll walk in and announce "I'm getting married!" And everybody had better pay attention OR ELSE.

She seems to think a kallah is the most pedantic kind of teacher, because her weddings always come off sounding more like an ultra-bossy circle time. Where she gets to stand on a steppy-stool and announce repeatedly, "okay, guys - guys, okay!"

Elisheva said she doesn't think they say "guys" that often at a real wedding. Her weddings can also get very loud. Oy.