Easily the worst supper ever!

I don't even want to talk about it... I had SUCH high hopes. And it does look okay! 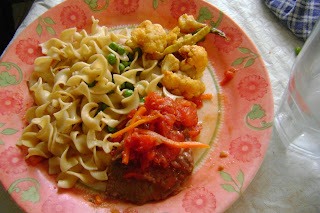 See, it doesn't sound awful!
But it was, so there you go.

Just had a daring thought: I have a small clump of "Black Cherry" tomatoes almost ripe out back... would it be a desecration to turn them all into soup???

We went to Dusk Dances on Tuesday at Withrow Park. Tonight is our last chance to see Clay & Paper's Horsefeathers production in Dufferin Grove. but it's a lot for one week, although it does sound like a child-friendly production.

Complicating things is the fact that I have my aerobics class Thursday nights. And the fact that it's raining. And then they just called to cancel the aerobics, and the rain seems to be letting up... but I still need to stop in at Barbara Frum because I told Judy I'd pick up a library book for her. What a busy day!

Today was our last Toddler Time at the library. Yes, neither of the littles is technically a toddler. It runs from 18-36 months and Naomi is fully 6 months too old, while Gavriel Zev is nine months too young (yes, he hit 11 months this week!). Still, they love Shannon, the librarian who does it, and GZ has the best, best time shrieking along with all the music. When he's not starving because it's at 10:30, his official Cranky Time.

Ugh. More rain.
Maybe we'll just drive down to Dufferin Mall and get ice cream and see what happens. I was looking forward to hitting the marmer's farket with Ted, too. Blah.
Yes, I know how to say it properly. I just choose not to.