You call it clover, I call it MULCH... 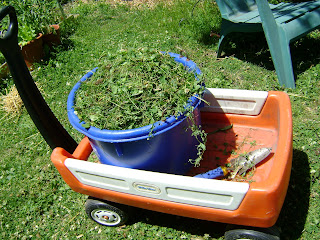 OK, that's it. I will never again bitch about my "clover lawn." In case you've missed it, though, it's been quite entertaining. Every five minutes when we're sitting out front, I comment at random about how our so-called "lawn" is actually 97% clover. It's especially obvious when the clover is in flower, which is basically ALL THE TIME NOW.

But like I said, the bitching is over, because take a look at this yummy-scrumptious bucket o' ossim mulch. 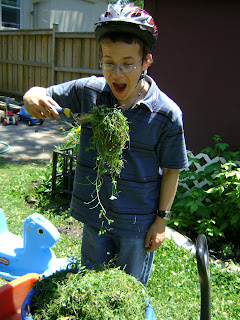 Here, a demonstration of just HOW delicious this stuff will be for my poor nutrient-depleted veggie square-foot bed.

I managed to get that entire bucket full of clover mulch simply by dragging a grass rake over the front lawn. Tough going, pulling against each strand of clover, but the end result is a slightly less clovery FRONT lawn and a really healthy layer of green stuff in the BACK yard to toss onto the veggies. 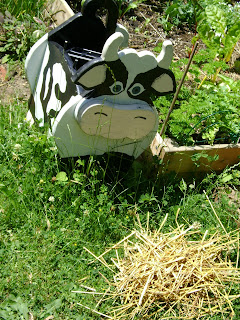 I cannot tell you how happy this character makes me in the garden. EVERY garden does need its cow. I spotted this one in the trash a couple of streets over and Elisheva spotted it a moment later, when I pulled over. She wanted to claim it for her room but I insisted - virtually body-slammed her, much to my shame - on taking it for the garden.

She is a regal presence, sitting in the corner of square-foot bed #1, regally munching her clover or, in this case, the pile of hay that Naomi has offered her. Naomi also milks her dutifully, offering buckets of warm "udder milk" (she calls it "udders" for short, as in "it's okay - do you want some udders?") to horsie and dolphin. She knows it's warm because we caught the milking at Riverdale Farm a couple of weeks ago.

The cow really does have udders, by the way. Or at least one, a wooden one tucked in quite discreetly in front of the rear legs with two real pink teats. I know, cuz today was my day to do the milking while Naomi was tending an ailing dolphin.

Our neighbour's kid, Tristan (I typed neighbours', but they've recently split up, so now it's just one neighbour) tried to ride horsie the other day, and you should have seen the look on Naomi's face... like, just cuz he has wheels doesn't mean you actually SIT on him and RIDE him. I tactfully substituted dolphin, which still bothered her a bit. Can't wait 'till Gavriel Zev wants to sit on and ride these things for himself...