Which means... hey, welcome back to Montreal! It's so rare that four pictures of me taken in a row look half-decent, I pretty much HAD to post them, non? 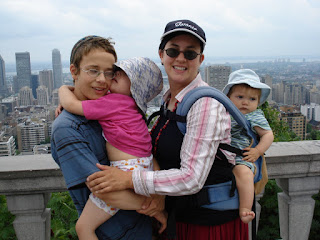 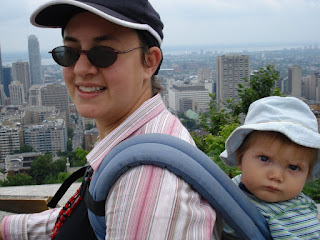 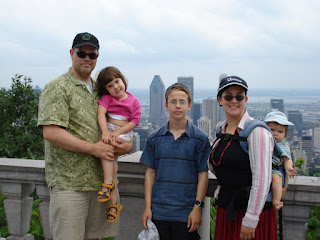 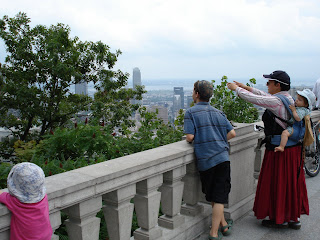 Supper at the world-famous Ernie & Ellie's Place on Decarie in the run-down depressing Mall of Broken Dreams that also includes our second-favourite Montreal place, the ever-more depressing Dollar Cinema. Despite the name, they have raised the rates to $2 per movie per person... but the snack bar items remain $1 as ever.

We saw Wallace & Gromit again - saw it in theatres a couple of years ago, but Naomi never saw it, I think, or maybe she was a baby. Then we met Abigail for the aforementioned supper, which was lovely.

They have a $25 tasting menu now, which is ridiculously expensive, but nicer than a buffet because you don't have to get up. Abi acted horrified about the cost, then ordered it and ate a ton. She also acted like she'd never been in a restaurant before, and asked us a bunch of questions about the tasting menu, even though we'd never gotten it before. They do make it complicated, but even I could tell her you are NOT allowed to get the all-you-can-eat menu "to go."

So basically, that was it: arrive, mountain, movie, supper, drive back to Ottawa.

The kids were monsters, all but YM. So I guess that's two monsters and one good kid. I have vowed never to take them on a road trip, or to a restaurant, ever again. Or a movie. I was actually hoping Naomi would sleep through the movie... nice, dark, animated... well, ha ha ha; of course she didn't. She was so hyper and overtired, having napped maybe thirty seconds in the car. The way back was just as much fun; the baby didn't sleep at all and Naomi only slept for the 30 seconds it took for him to start kvetching and crying, and then he woke her up & they both kvetched and cried.

Then, yesterday, we did it again, only for FIVE hours instead of just one. Actually, we made great time. I drove straight through for about 3 hours before we stopped for a potty break and Ted took over the driving, just in time for the heavy rain.