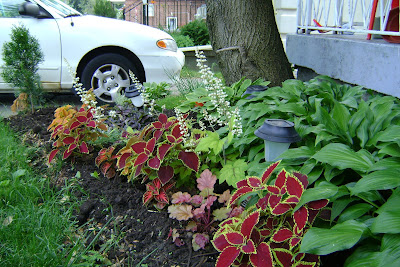 The award SO FAR goes to this feisty little Heucherella. Yes, all those spires of frothy white blooms are from a single President's Choice "I can't believe I'm gardening" Stoplight Heucherella. I count SIX in this picture and it truly does look like they're all over the garden because of the angle of this picture.

I am SOooo happy with this purchase. It was ridiculously expensive, $12.99, I think. But worth it. I was captivated at first by the arresting lime of the leaves and the characteristic red spot at the centre of each one. But the flowers have me completely won over.

Did I mention it's been blooming for almost a month already? And I only just planted it a couple of weeks before that. I love this plant; definitely my hardest "worker" in the garden!

(particularly compared to the also President's Choice "Peach Flambé" Heuchera just in front of it in this picture which is mostly a dingy brown colour and has never flowered... it's now in its third summer here, though I moved it twice this year, so maybe that's why. Still, the colour is nothing near as vivid as what I'd hoped for) :-(