OK, first of all... what the HECK is going on here??? In the time it took me to type this, I have sneezed FOUR times. Just sitting in the computer corner of the room, apparently, is enough to make me violently sneezy. I have opened the front door wide - at the risk of letting in the annoying mewing neighbourhood cat (Ted found her in our room one day last week and downstairs another time, so this is a very real risk). I just cannot stand being here another second. I'm all hot & flushed and sneezing my bloody head off.

Speaking of which, I can't seem to stop myself saying "bloody hell," an annoying Britishy affectation that prompted Naomi last week to mimic it as "bloody who." So now, of course, I'm trying to cut back. 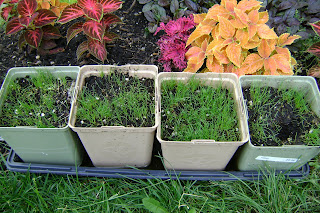 So!
<----- This is grass. Eco-lawn grass in little trial-sized growing pots. It's my attempt to salvage our lawn area. So far, so good. My plan is to transplant each of the four pots as a "plug" in a different area of the lawn: two front, two back... one sunny & one more shady in each "zone."

I was very optimistic until I found this blog of someone actually fairly near to here who tried it and it looked great for one season but then didn't grow in again the following spring. Disappointing... and now I'm worried!

And for anyone hoping to make a pilgrimage out to Wildflower Farms, who makes & distributes the Eco-Lawn fescue mix... don't even think about buying perennials unless you have a TON of money to spend. They start at around $5.99 for a single-stemmed plant, so unless you really believe the plants are so much healthy, more organic, etc., save your cash and arrange for a plant swap closer to home. Most species are pretty run-of-the-mill, though I admit there is a good selection. I caved and spent $12 - insane! - for a nodding wild onion and an upright Goldenrod (solidago) variety. For that price, they'd better make it, which is the other problem with spending money for plants... with giveaways, you can be a little more philosophical if they fail (though I guess some would say you get your money's worth!).

Oy... still so sick and miserable. Coughing and now wheezing. What the HECK is in this corner that's killing me??? It must be this corner because I don't remember being so sneezy even when I was sitting in the other corner on Shabbos, reading. Just four feet away, but a world healthier...