No picture for today's LOW, but I know exactly what it is and it makes me SO sad.

Garden Low:
The lettuce sap was decidedly milky-looking when I picked it for supper tonight... and it is starting to taste bitter, so I think most of it will be bolting soon, and then that's it for lettuce.

Garden High:
There are so many, and I was about to gloat about my incredible tomatoes - I had actually already typed it and had to go back and substitute "I was about to" for "I'll have to" because what I HAVE to gloat about is... the potatoes are flowering!

Never having experienced Potato Success, of course, I don't really know if I should gloat. Last year, they flowered, too, and I have no clue what happened, because we never saw a single potato. Anyway, the flowers seem to be forming on the purple ones in the "reclaimed" area under the back awning. 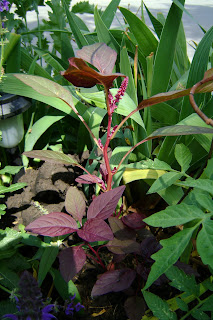 Amaranthus "Velvet Curtains" - or at least, a miniature version of it. So far, underwhelming. 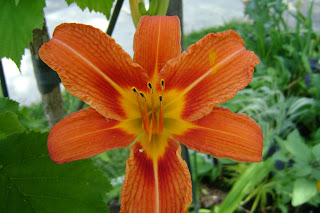 Ditch lilies - common as all heck, and they almost dwarf the little hazel tree they're planted around, but perversely, I enjoy them. Maybe because they were all free, gifts from Freecycle and Craigslist and everybody all over the place. 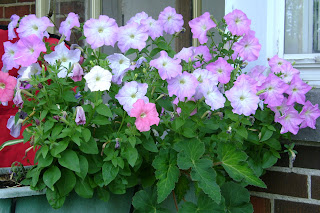 I know, I know. I have said it before. I would love to save seed from these guys, but no idea what the seed pods look like!
The leaves creeping in underneath are begonias, red or salmon ones that promise to look truly hellacious if they actually bloom against all that purple and pink pastel stuff.