Einstein? Or Down Syndrome child? 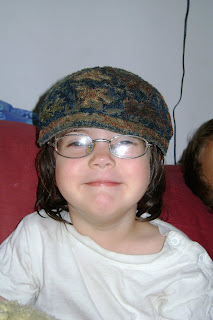 She either looks brilliant or retarded in this picture. Not sure which. She has "borrowed" YM's glasses and kippah, which he's technically not allowed to permit her to even touch (yes, it's HIS responsibility to keep his stuff away from babies, to a certain extent). But in the end it was so cute I had to take a picture. She looks like a squished-up nerdy ten-year-old boy.

So we're off to Ottawa - somehow - tomorrow. No music for the road trip - waah!!

And did I mention that I had to do a dvar Torah at the ladies' Shalosh Seudos today??? I was asked a few weeks ago, but then they found another speaker, who was listed in the Shabbos bulletin this morning. Naturally, I spent all of yesterday anxiously preparing and was thus somewhat peeved that nobody told me I wouldn't be speaking after all.

BUT - I was also relieved because my DT wasn't finished yet and so I basically printed a bunch of rough ideas that I'd planned to polish up at the last minute - my usual teaching strategy, basically. I prepped and found a few sources this morning before going to shul, but then when I saw the bulletin listing someone else as the speaker, like I said, I was relieved.

Knowing I wouldn't have to speak, I left those notes at home, though I did give a little something over at lunch. And then, due to heavy rain or whatever, the speaker didn't make it and I had to give a "talk." Ha ha. Short, unprepared piece on the bnos Tzelofchad.

I have no idea what kind of thing I said, though people seemed moderately appreciative afterwards, despite my undoubtedly beet-red colouration throughout and sweaty sheen of mortification during & afterwards. Luckily, there were two other people who were able to say something slightly more sensible. So much material there, and still, I fumbled. Drat!

Oh, and I invited Rachel from the next street over to come with her kids and splash in our wading pool. Ulterior motive: keep my kids behaving decently and maybe giving me a bit of a break from watching them while I fold laundry! >:-)))