These ARE the after pictures. 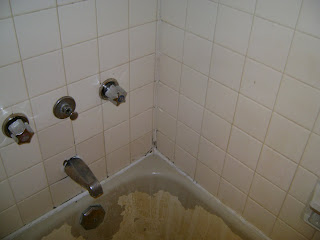 OK, even at its most stunning, this bathtub is never going to win any beauty contests. But at least it's clean. This is AFTER me spending a whole hour yesterday afternoon scrubbing every single inch of grout between the tiles. You already saw the BEFORE shots in the kiddies' bathtime pictures I posted from Ted's camera last week. Ugh.

Two kinds of mould - pink and black. Ugly, ugly. Anyway, the slime has been scrubbed away, to reveal the inner... whatever... of this bathtub. 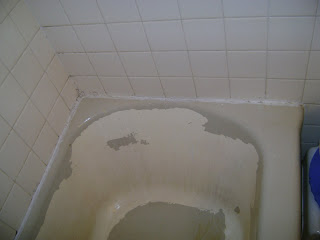 Here's the remains of the paint the previous owners painted the tub with to make it look like a real bathtub and not the mutant leprous bathtub it truly is. 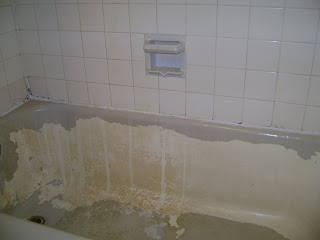 Ew. These lines look like "lines of cleanliness" where bleach or some super-strong cleaning agent has dripped... but I have been unable to recreate the same degree of whitness elsewhere on the tub surface.

The soap dish was almost all pink with slimy pink-mould, whatever that stuff is. Now it is clean & white. 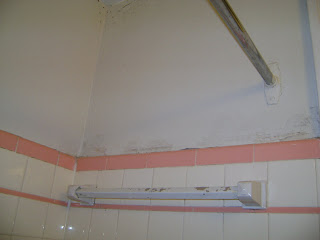 There are still a few speckles of black mould at the top corner where I was unable to reach... but it's BETTER. Way better. Speckles on the towel bar are NOT mould - just flaking paint.

The whole bathroom is nice & echoey today because I took down the curtain for a good cleaning as well. (yes, it was mouldy / mildewy also...)

Now I have to phone Sears Yorkdale because I have a hunch they are NOT going to show up between 12-6 as promised.