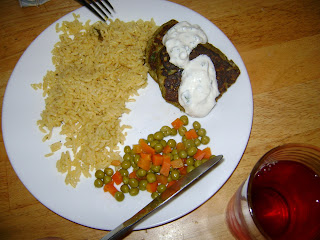 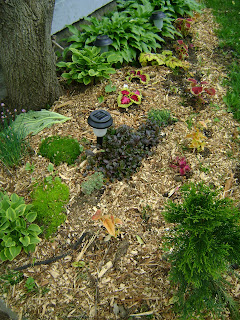 Here's the front perennial bed... it's actually looking like something - a little bit.

This week's most beautiful surprise has been the irises "borrowed" from the torn-down bulldozed house across the street. I transplanted them as a huge flat chunk of shoots waaaay back in March. The asian gardening lady assured me they were lilies - well, they're not. My mother said she could tell by the fan shape of the clusters that they were irises, and she was right.

As irises have been emerging everywhere in the neighbourhood over the last two weeks, I have been kind of dreading their appearance, fearing they would be exceedingly common-looking; either yellow, or purple... but I never dreamed they would be BOTH. I didn't choose them or plant them, so I have been happily bragging that these are the best and most beautiful irises in the world. Check them out! 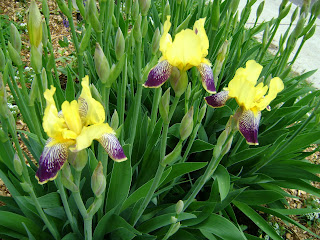 I cannot shake this feeling of impending doom... isn't that an awful and pretentious thing? I wish I didn't feel like the whole world was about to cave in on me. Gets in the way of just about everything. :-(

Anyway, g'nite! Off to immerse myself in Sarah Silverman Season One. (courtesy of Blockbuster)