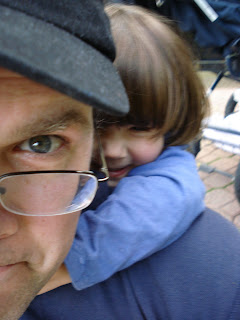 The last post had such a blah and unflattering picture, here are some decent ones - Ted took them - to make up for that awful shot of the bathtub. 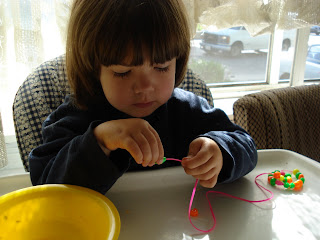 Can't believe she's old enough for bead-stringing! These are super-cheap beads courtesy of the treasure box at the dentist, where Naomi sat SOooo nicely while the hygienist "counted", then polished her teeth. Now we have to floss her, every single night. Ugh. 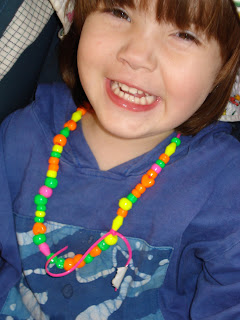 She now wears her new necklace every day. Here she is in the carriage on the way to Bubby & Zeidy's house tonight. 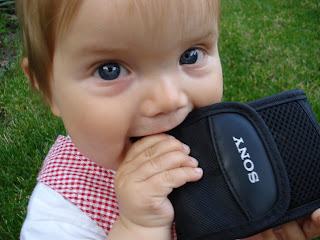 And the mandatory camera-bag-chewing shot. Poor baby has NOT been himself today at all. He's having tummy problems, I think... pretty burpy and not eating normally. Not that he's usually voracious these days (as opposed to three months ago when I had hoped to exclusively breastfeed him), but he refused just about everything except straight bread.

In this shot, Ted had to take him outside from my parents' house because he would not sit calmly inside - he was doing nothing but crying and whining, in every possible position and configuration (high chair, lap, standing, sitting, nummies, food, drink). OK, he was quiet for a second while he drank water from a glass, most of which ended up in my lap.

Anyway, outside proved to have lots of distractions, including dogs, which he's totally into these days. And he went to sleep okay... let's hope they both stay that way all night long.

Zzzzzz... did I mention Ted's off work tomorrow? YM's going to the yeshiva, aiming to be there for 9-9:15 ish. So it should be a pretty mellow morning. Elisheva's the only one on any real kind of deadline, and even then, it's the last week of school - pretty much a joke. Yes, that's right: she'll be a Grade Eight in a few days.

Shhh... bought this book for Mary. The beauty of ebay is that I can just have it shipped directly to her - I don't even have to leave the house to go to the post office. The downside is I don't get to make sure it's in decent condition, but anyway... how bad could it possibly be? (otoh, it's a 1971 edition; maybe I should have inspected it here first... hmm...) Oh well!