Taking the boys (& Naomi Rivka) out!

How to entertain a red-blooded 13-year-old video-game addict, his 11-year-old history-buff friend, a nummy-interested baby and a squirrelly spring-yearning toddler?

Bring them to see flowers!!!

That's what we did today at the historic Allen Gardens.

The boys were actually reasonably captivated by the warm temperatures - and the varying temperatures from room to room - as well as the numerous plant species. Doesn't that sound dull?I had a great time, loved seeing all the living stuff!

But I wish they had labels for the plants. I seem to remember saying that last time, because otherwise, unless you're "in the know" all you end up doing, a lot of the time, is standing around going, "Oh, there's another one of them floppy things, Edna!" I seem to remember saying that when I went with Sara also. This time around at least I knew some of the more obvious things. Lots of fabulous spring things in bloom; the "spring" room was easily our favourite, with everyone's least favourite being the "desert" zone, which reminded me of everything I can't stand about summertime - hot, hot, hot, and dry as a bone. Other rooms were also a bit hot & muggy for my taste... but spring. Wow. Can't believe it's almost here. 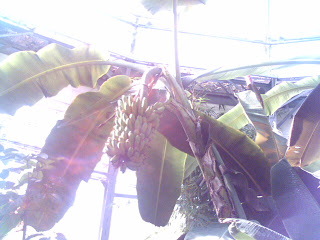 This one (at left) was pretty obvious, even to me... it's a BANANA tree, in full fruit, or whatever it's called when it's not really a tree and the bananas aren't really fruit (the bracha is borei pri ha'adama, which I actually just pointed out to Luka this morning over breakfast!). 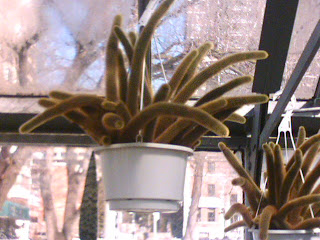 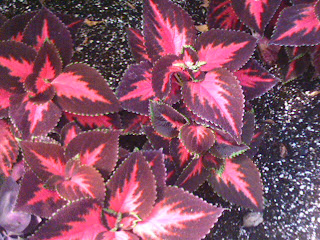 And this is what a coleus is supposed to look like.

Supper: Ted-made Ground-beef pasta sauce with Ted-made pasta, frozen bread, plop of carrots on the side.

Not the most inspired supper ever, but my back has been in extreme pain for the last two days (hmm... when did it start? maybe from carrying Naomi in the ergo?).
Suprisingly, it didn't hurt much when I had Gavriel Zev in the Moby going downtown today - that thing gives a TON of support! But when I took it off, I could barely lift him. So I played on the floor with the littles while Ted made the supper. 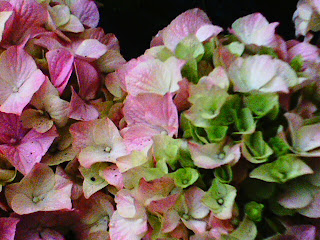 I caught Hydrangea madness at the gardens today. Picking Ted up from work, we went to Superstore to buy the meat for supper (I was supposed to have been going tutoring, that's why I was picking him up) and they had a bunch of hydrangeas for $5 apiece. I bought one but now I want another... at Lowe's, they had ones not even as nice for $15-20! At the gardens, there was no end of hydrangeas, and they were so lush, not huge and floppy. I wonder if the trick is in the gardening of them, of if they are a special dwarfish kind?

Can I just say I HATE the Blogger /Picasa interface sometimes??!? If you accidentally press backspace one time too many - and there's no way to tell if this will happen - it will delete one of your images for you. And there's NO undo! No way to get it back except to cancel out and start all over again. Sure, you can copy and paste the text, but you'll lose all your formatting. VERY, very crude design. This booboo has happened to me many times, maybe a couple dozen and I want to scream and cry each and every time. Just an innocent press of the backspace key and all is lost! Never mind that it won't let you select more than 4 images at a time... why four?!?

But enough about me... what do you think of me?

Oh - Purim was lovely. Thanks for asking! 30 baby sunflowers made their way out into the world with the following poem:

It’s a great time of year to get outside & growing!
With raking and hoeing, with seeds we are sowing.
This Purim we’ve chosen a "gardening" theme:
Spring’s taken so long that it felt like a dream.
But soon we’ll see buds and branches and shoots,
Soon little veggies will spread out their roots.
May your flowers grow strong, may they cling to the soil,
Like the Jews cling to Torah in times of turmoil.
May your spring grow so bright & so easy and sweet…
And may the seeds of redemption soon "grow" complete!

I realized too late that this was perhaps a tad heavy-handed, especially for some of the more secular recipients. Oh, well! I don't care!
The sunflowers were potted up (pots from Dollarama aka $ama) with a tiny wooden ladybug ($ama), stuck on a plate ($ama), accompanied by a baggie with sunflower seeds & raisins and a pair of hamentashen. All wrapped up in cello basket wrap and tied with a nice bit of ribbon (been in the basement for years). They looked beautiful, albeit somewhat insubstantial when opened. I just didn't want to give away crud.

Costumes: Ted, sergeant pepper beatle, I was a shemittah farmer, YM = "boy in a suit", Elisheva had a readymade cow costume, Naomi was a cat, and Gavriel Zev went as a sock monkey (costume made of socks). Maybe someday I'll have pictures developed so I can post them here waaaay after the fact. Oh, joy.

Life is okay. Tired now - I've been making wipees for two days and now find out they're probably too big for what she wants them for. (wipees cases). Oy. SO tired and my back hurts SO much. :-(((